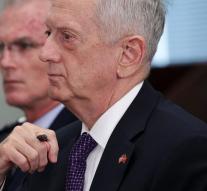 the hague - The rising tensions between the United States and North Korea are raised during a visit by Minister Jeanine Hennis of Defense to her American colleague James Mattis. The two officials also speak in Washington on Tuesday the military missions to which both countries participate, such as Iraq, Syria and Afghanistan.

Furthermore, ministers talk about a better distribution of the burden within NATO alliance and the greater responsibility that Europe has to take in the area of ​​security, according to the Ministry of Defense. The US insist that Europe has to raise more money for defense.