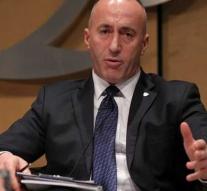 pristina - Prime Minister Ramush Haradinaj of Kosovo fired the Minister of the Interior and the Chief of the Secret Service on Friday after the arrest and extradition to Turkey of six Turkish citizens.

The Prime Minister had said that he was unaware of the operation to deport the six. They were arrested in Kosovo on Thursday because they would have links with schools funded by the Fethullah Gülen movement. Ankara blames this for the failed coup of 2016.

'Both are being fired because of the arrests that took place yesterday,' said a senior government official.