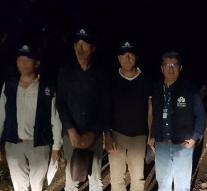 the hague - 'This is very good news. I am very pleased that the abduction has ended so quickly. 'That said Minister Bert Koenders of Foreign Affairs in a first response to the release of the team of the Spoorloos program. The minister responded relieved of the release.

Derk Bolt and Eugenio Follender were released today in the highly dangerous region of Catatumbo in northern Colombia. They make it pretty good for circumstances. The ambassador has been able to speak with Bolt and Follender. Their families in the Netherlands have been informed by the Ministry of Foreign Affairs.

From the outset, the Netherlands has worked with the Colombian authorities to bring the kidnapping case to an end as soon as possible. Minister Koenders of Foreign Affairs thanks the Colombian government and others for the efforts that have contributed to the end of this drama. 'We've been in constant contact with the Colombians who worked hard at the release. I have a lot of appreciation and thanks for their contribution, 'said Koenders.