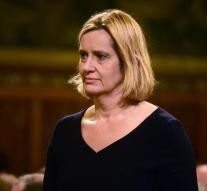 london - Britain wants heavier penalties for attacks with acid. That's what British minister Amber Rudd wrote on Sunday in a Sunday Times broadcast. In London, more and more attacks are taking place. Last Thursday there were five attacks on moped riders in a time frame of one and a half hours. Several of them suffered burns in the face.

According to Rudd, acid is increasingly used as a weapon. Therefore, she is going to investigate whether the law needs to be tightened and how victim care can be improved. Rudd wants to present those corrosive substances as weapons, so that perpetrators feel the full power of the law. '

She also wants to put the sale of acid on tap.