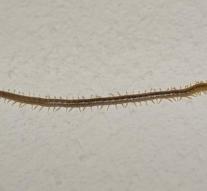 fresno - Researchers found in a cave in the Sequoia National Park in California discovered a new kind of centipede. White animal has not only 414 feet but also has four penises.

The discovery was published on the website zookeys that delved into biodiversity.

The centipede, which has been named Illacme tobini, has even more bizarre anatomical features. He owns two hundred glands which secrete a toxic substance in defense. Also can produce the animal threads like a spider does.