Home / World / Millions of pilgrims in Saudi Arabia for hadj 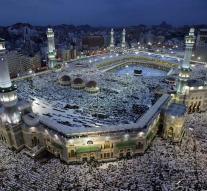 mekka - About two million Muslims start the hayj, the annual pilgrimage to their holy places in Saudi Arabia.

According to Saudi media, about 1.7 million pilgrims come from outside the kingdom.

The believers gather on the plain of Mina near Mecca on Wednesday. The traditional highlight takes place on Thursday: pilgrims gather at the Arafat mountain. The authorities have taken additional measures to guide them. Thus, pedestrian trails in the Saudi Gazette area are protected by barricades and walls of cement.

The hadj is one of the greatest religious manifestations in the world. Every Muslim is supposed to do the pilgrimage at least once in his life. The condition is that they are physically and financially capable of doing so.

The Ministry of Foreign Affairs can not say exactly how many Dutch Muslims travel to Saudi Arabia because of the Hashi. The department advises Dutch pilgrims to follow the instructions of the authorities strictly, to be alert and to keep in touch with the travel organizer.