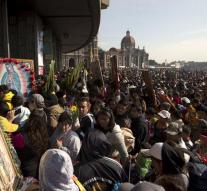 - Nearly seven million Catholics on Monday at the Basilica of the Virgin of Guadalupe in Mexico City raised. The faithful gathered in and for the church of the patron saint of Mexico and Latin America. The annual pilgrimage on December 12 is one of the largest in the world.

Some pilgrims were days on foot or bicycle on the way for the religious gathering. Which goes back to a Marian apparition in the year 1531. On that occasion, a converted Aztec was asked to build a church in honor of Our Lady.