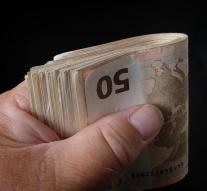 - Divers from the Bulgarian police have millions surfaced in counterfeit notes of 500 euros in a water reservoir in the south of the country. The Bulgarian newspaper The Standard reported Tuesday that sure what this Eastern European country enters into a record. It involves at least 12 million of counterfeit euros. The total amount of counterfeit money has yet to be determined, because many packages of banknotes yet to dry.

Prosecutor in the city of Plovdiv, Sotir Tsatsarov, said the forgeries were incredibly good. ' They look really great if used banknotes '' says Tsatsarov. However, some details are different. Thus missing out on the map of Europe, the Greek peninsula of Athos.

The investigation against the counterfeiters has been running for some time. Main suspect and owner of a printing house in the region of Plovdiv, Petar Petrov, received six years in prison for a case of counterfeiting. Furthermore arrested two more suspects in the case.

The European Central Bank will cease in 2018 making banknotes of 500 euros. They are used a lot in the ECB in criminal circles and the circulation of black money.