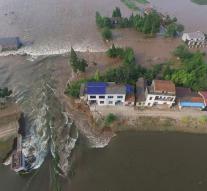 The authorities in the central province of Hunan spoke across the state news agency Xinhua fifteen dead and eight missing by thunderstorms and strong winds. Thereby more than seven million people in Hunan fled and were 18 000 houses damaged.


This summer heavy rainfall in China has cost over 200 lives. 1.5 million hectares of crops were damaged so far, resulting in an economic loss of about $ 3 billion. China's central bank announced Friday to grant financial aid to the flooded areas.