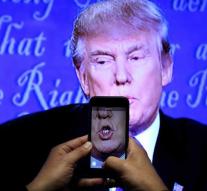 - During the US presidential election could be well be that millions of voters stay at home for fear of hackers and cyber espionage. That concludes protector Carbon Black, the former Bit9, which commissioned a survey.

Carbon Black asked seven hundred registered voters online for their views. More than a third of respondents feel that their information is secure. And of that group considering a stay at the five why home. If this applies to the whole population, it could mean 15 million people due to cybersecurity do not go to the polls.

Remarkably, those surveyed see the United States itself (28 percent) as a greater threat than Russia (17 percent).