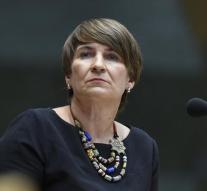 the hague - The budget for the reception of refugees in the region and emergency aid increases by a total of 80 million euros. That was announced by Minister Lilianne Ploumen (Foreign Trade and Development Cooperation) on Friday.

The Cabinet has decided to increase during the consultation on the spring bill. Ploumen calls it 'very important for those who suffer severely from conflicts and natural disasters.' The minister says that when spending the money, extra attention will be paid to the position of women and girls.

For the reception of refugees in the region, 40 million euros will be available extra. This money will also be used to assist in returning to the country of origin.

Ploumen gives an example of the situation in Libya. There are many migrants stranded, where they fall victim to smugglers. For these migrants, shelter is arranged and a guided return to the country of origin. This gives them an alternative to the dangerous crossing to Europe. In addition, there are programs for education and work for refugees in Uganda and Kenya.

For emergency aid, the budget also grows by 40 million. That money will be used for medical aid and food in Yemen and northern Nigeria.

'If you look around you, it's clear that we can not let people go to their destiny,' said Ploumen. The refugee stream and its causes are called 'one of the most important subjects of this time.'

The total amount of emergency aid now comes to 160 million euros, after it has already been raised from 57 million to 120 million. The increase is now possible because last year fewer refugees came to the Netherlands than expected.