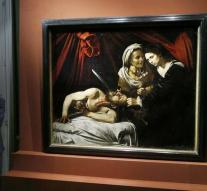 - A French family has made possible the discovery of the century in their attic. Under a thick layer of dust was a painting that might be according to experts sometimes by the Italian artist Caravaggio. Estimated value: 120 million euros.

The family that wishes to remain anonymous, the painting discovered during work on the leaky roof of their house in Toulouse two years ago. It was possible for over 150 years in a room behind a door that they had never opened. Tuesday, the painting was presented at a press conference in Paris.

Experts still doubt whether the painting actually Caravaggio can be attributed. Italian art expert Eric Turquin is nevertheless convinced. 'A painter is like any other and has certain tics,' he told Reuters. 'And in this picture you recognize the tics that are specific to Caravaggio. '

Other experts say, however, that the painting could also be a copy. Or a work of a student of Caravaggio. There is now further research into the canvas.

The French authorities have meanwhile ensured that the painting France for the time being not to leave.

Caravaggio lived from 1571 to 1610. The painting 'Judith Beheading Holofernes' was known for a time their own copy of which is attributed to the Flemish painter Louis Finson.