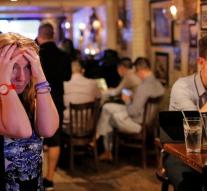 london - The 'Leave' camp drew more than 1.2 million votes more than the advocates of a longer stay in the EU, says the British electoral council.

British voters 72 percent cast their votes, the electoral council announced during an official ceremony in the town hall of Manchester. Of these, 52 percent voted for an EU goodbye.

The result is a surprise. According to most pollsters were going to win the favor of EU membership narrowly.