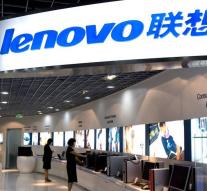 peking - The Chinese computer maker Lenovo has suffered a loss of millions in the past quarter, of about 147 million euros. Sales decreased slightly and came to 8.5 billion euros.

The company lost its position as the largest PC maker in the world, while the smartphone business again lost a lot of money. The serchant branch, in turn, suffered from shortages of components, higher costs and aggressive price strategies of competition.

Lenovo is trying to figure out again, as competitors HP and Dell have done before. Those companies introduced new models that customers would like to buy and see their PC branch growing again. Lenovo has been talking to Japanese industry director Fujitsu for a while now for a collaboration to launch such an impact.

Lenovo also puts a lot of money into artificial intelligence, the Internet of Things, virtual reality and other new techniques. Over the next four years, it's about € 1 billion.