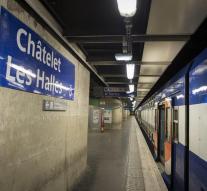 paris - A French military has mastered a man who attacked him at a metro station in Paris on Friday morning with a knife. The soldier nor the attacker did injuries, reports French media.

The attack occurred shortly before 07:00 at the Châtelet les Halles station. The military patrolled there with security officers of the transport company.

Little is known about the attacker's motive. According to some reports, the man called cries referring to the Islamic State terrorist group.

In France, 7000 soldiers have been involved in anti-terrorism measures in the field of public security. On August 9, six soldiers were injured when a man with a car entered on them at Levallois-Perret near Paris.