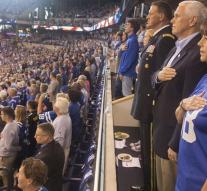 washington - US Vice President Mike Pence and his wife went out of protest on Sunday at the match between Indianapolis Colts and San Francisco 49ers in the NFL. They decided to leave the Colts Stadium because some players of the visiting team kneeled during the American Anthem. Several NFL players have been doing this for several months as a protest against police violence against especially black Americans.

'I asked Vice President Pence to leave the stadium as if only one player would kneel and damage our country,' said President Donald Trump on Twitter. 'I am proud of him and second lady Karen. ''