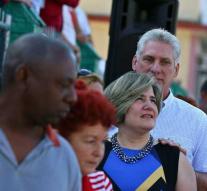 havana - The National Assembly of Cuba has formally designated Miguel Diaz-Canel as successor to President Raúl Castro, who is retiring after two terms of office. Salvador Valdes Masa has been named the new vice president of the country.

In Cuba no presidential elections are held, but the president is elected by the parliamentarians of the National Assembly. Actually Castro (86) would leave on February 24, but that was shifted by the busy aftermath of Hurricane Irma.

It is the first time since the beginning of the sixties of the last century that the country is no longer ruled by the Castro family. Raúl Castro remains the head of the Communist Party, the only political party of Cuba. Raúl Castro succeeded his brother Fidel in 2008, who was stunned with his health. 'El Lider' died in November 2016 at the age of 90.