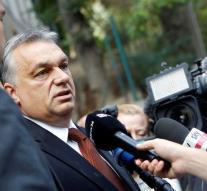 budapest - The referendum in Hungary on the recording duty of refugees imposed by the EU seems to be invalid because the turnout was too low. Of the people who went to vote, the majority was against that requirement.

Hungarian politicians estimate the rise for about an hour before close of polling around 45 percent. 50 percent plus one vote needed to declare the referendum valid.