Home / World / Migrants rescued from truck after crash in Mexico 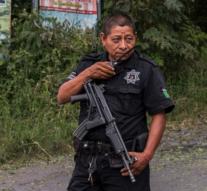 - The Mexican authorities have found 110 asylum seekers in a truck. That happened after the truck in another vehicle had crashed in the east of the country.

Rescuers heard people calling for help when they arrived at the scene of the accident. The cargo area of ​​the truck appeared to be packed with migrants include Guatemala, El Salvador, Honduras, and Ecuador. The driver had after the accident took off.

Many asylum seekers in the car, there were, according to the Mexican authorities in bad shape. They had health problems and were almost suffocated in some cases. The group, which existed for almost half of minors, tried to reach the United States.