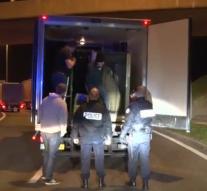 - Four refugees in their attempt to get to England from France in Calais jumped in a truck with a polar bear . One of the migrants hit by the flight when the animal started growling angrily .

The other three vermanden themselves and entrenched themselves behind the cage of the animal but also their flight did not last long .

The accompanying persons staff of the zoo in Doncaster where the bear was brought from Moscow to go , saw them breaking into the truck and jump in and alerted the driver.

Photos and a video in the British newspaper The Sun on Wednesday to see how the French police then took the trio from the cargo area while the polar bear watching from his cage.