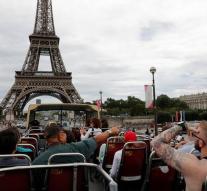 paris - Under the Eiffel Tower, three migrants were found in the engine spaces of three British coaches. They were hiding in the buses because they wanted to go to England. The buses return to England on Sunday.

The three torrents were discovered Thursday night by bus drivers who warned the police. According to French media, the Parisian authorities have not previously experienced that migrants tried to come to England in this way.

The three have no identity papers. The two elders say Sudanese and 20 and 22 years old. The youngest would be fifteen years old and come from Eritrea.