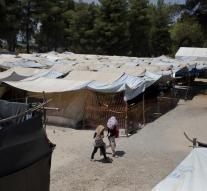 - "Fighting between migrants in a refugee camp on the Greek island of Lesvos on Monday dozens wounded. There is also a lot of damage to tents, so inmates are camped outside the camp, Greek media report and an eyewitness."

"The flame hit in the pan when Afghan migrants trying to prevent that food would be brought into the camp, told a camp resident from West Africa. They are waiting in Moria fed up and hope that a collective hunger strike a crossing to the Greek mainland and then enforce access to Western Europe. But mostly Syrian families in the camp would certainly take the meals and clashed with the Afghans."