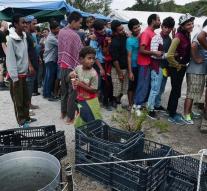 athens - Greece wants to get rid of the overcrowded refugee camps on the islands in the eastern Aegean Sea. ' We will soon bring a large number of migrants to the mainland, to relieve the islands, \'said Greek Deputy Foreign Minister Nikos Xydakis Wednesday. He announced that the refugees ' guarded buildings\' be accommodated.

Xydakis allows EU countries partly responsible for the violence in Greek refugee camps. ' The fires and unrest in some refugee camps on the islands are partly due to a lack of redistribution of refugees on the Member States and the lack of support from the EU countries. \'

The agreement between Turkey and the European Union stipulates that the refugees come mainly from Syria and traveled through Turkey, have returned to Turkey to prevent them from traveling further.