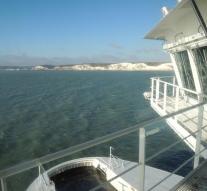 Refugees try regularly in makeshift vessels to reach Britain, but as far as was announced previously on their own crossing ventured into a kayak.

The canal is about 32 kilometers wide, because means that the man must have paddled about twenty kilometers. The man of around 30 years would have stayed months in the recently vacated refugee camp in Calais. He has applied for asylum.