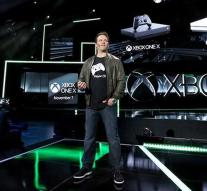 los angeles - Project Scorpio, a long time a work name, is called Xbox One X and appears November 7th worldwide for € 499. It's the fastest game computer ever made.

With 6 teraflops GPU, and 12 GB of RAM memory, a faster processor, a renewed cooling system and a 1 TB hard drive, the Xbox One X is the fastest gaming computer ever. And it's funny; The console is also smaller than last year's Xbox One S. The new game console supports 4K games, HDR and Dolby Atmos, and allows certain games to run at 4K resolution at 60 frames per second.

The images of the newly announced racing game Forza Motorsport 7 showed exactly that. When all the graphics and bells are deployed, you get unprecedented detailed images and a sensational sense of speed. The show in Dubai in a Porsche concept car was graphically very impressive. That's what you can do as a consumer for the money, the Xbox One X costs € 499, but given the powerful hardware that players get for it, it's a fair price.

A lot of games were shown during the press conference, 42 in total, of which 22 had a form of exclusivity. Striking was the diversity of the offer, with more space for indie titles and colorful games. A sequel to the beautiful platform game Ori and the Blind Forest for example; Ori and the Will of the Wisps. The supported music affected many people in the audience. Also nice was the return of Sea of ​​Thieves, an open-world humorous pirate lady in which you are having adventure with friends. The game has a lot of potency and lets you play the Pirates of the Caribbean with a big wink.

Of course, there was enough action to get out of big Triple A games. Ubisoft showed Assassin's Creed: Origins- which also appears for the PlayStation 4 and PC- with this time decorating ancient Egypt. It seems that Ubisoft puts the franchise back on the map. The open world, GTA-box Crackdown 3 will be released on November 7 at the same time as the Xbox One X and will let you be a super agent against a city of criminals. And State of Decay 2 is a cooperative zombie adventure game

The big shutdown of the Xbox One press conference was striking enough Anthem; A new RPG action online co-operative game from developer BioWare and publisher Electronic Arts. Striking because this is not an exclusive title. Honestly, Anthem is a potential game of the show with its mix of Destiny, Mass Effect and Horizon, but the audience was expecting at least a small Halo 6 teaser or a new Microsoft's new ip as a final agreement.