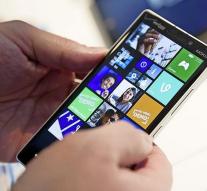 redwood - Microsoft stops supporting the Windows Phone 8.1 operating system. This means that users will no longer be protected against dangers with updates.

Microsoft only supports the Windows 10 Mobile OS operating system on Tuesday, but only one of five Windows smartphones. The other devices run on 8. 1 or older systems.

Version 8. 1 came on the market on July 15, 2014. The main feature was the digital help Cortana. It was not in the predecessors, versions 7 and 8. One year before 8. 1, Microsoft had bought Nokia, but the gambling on mobile seems unsuccessful. Windows 10 Mobile is a dwarf compared to iOS and Android, which together hold 99 percent of the market. The man behind the smartphone project, topman Steve Ballmer, has left. Nokia is self-employed and running the new branded smartphones on Android.