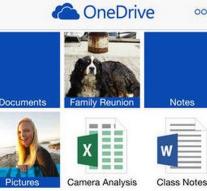 - Big companies like Microsoft and Google in recent years lured users away from competitors by offering large amounts of free cloud space. Microsoft is moving away from this policy occasionally restricted heavily in the free space.

Office 365 users since last year had access to unlimited storage in the cloud. According to the software giant made ​​some users here but abuse of which it is forced to abandon this unlimited offer. Also free users get considerably less storage space.

Microsoft announced yesterday that Office 365 users now get OneDrive 1TB storage. That is the same space that Microsoft offered to come with the unlimited offer.

The group of users made ​​it to fur would complete film collections and DVR recordings in the cloud storage and backup of multiple computers. In some cases a single user took less than 75 TB of storage space.

Users who are currently using more than 1TB, can keep their files for at least 12 months in the cloud. Office 365 users who do not accept the change may discontinue their subscription and have a right to money refund.

From early 2016 there will be more changes in OneDrive. So get non-paying users no longer provided with 15GB storage but must settle for 5GB. The additional 15GB for storing pictures is deleted. Users who are using more than 5GB storage, get an email notification that they are over their limit. They get a year's time to save their files somewhere else or extending the storage fee. After this, the files as a spokeswoman says.

Furthermore, the company no longer offers subscriptions to 100GB and 200GB. Only the 50GB subscription persists and is $ 2 per month.