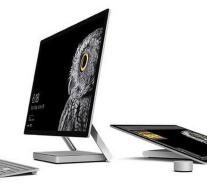 - Microsoft Wednesday at a special event in New York presented a new device: the Surface Studio. The device can change the all-in-one computer in a kind of tablet that can be operated with special accessories.

The screen is 28 inches tall and displays 13.5 million pixels. The ratio of the screen is different from what is usual: 3: 2. This probably has to do with the fact that Microsoft focuses on creative people with this device.

The Surface Studio is a purchase. A small number will be supplied for the holidays. The new device has a price tag of $ 2999.

In addition, Microsoft Surface Book, the cross between a laptop and a tablet, an update.

The battery lasts longer. On one battery charge the Surface Book is now sixteen hours. Improved graphics performance. According to the technology company in Redmond was mainly at the request of people who play games on their laptop. They wanted more powerful video performance.\n  \n  \n   advertisement

Microsoft has also given a processor upgrade. The Surface Facebook now has an Intel Core i7 on board.

The Surface Book is for sale found from November from 1499 dollars and delivery place. Orders can be placed immediately.