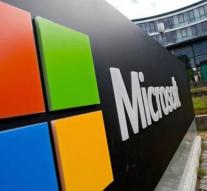 redmond - Microsoft makes fewer speech recognition errors. The accuracy level has been improved by 12 percent compared to last year. According to Microsoft, a latest software test found that only 5.1 percent of the words were misinterpreted. This makes the software as accurate as humans.

Last year, the system did not recognize 5.9 percent of words in a conversation, and Microsoft claimed that technology was equally superior to human qualities. Other researchers then concluded from their own research that people could handle conversations more accurately if they were having more trouble. In humans, the margin of error is 5.1 percent. Meanwhile, Microsoft has reached this level, reports the tech giant in a blog.

The research uses Switchboard, a collection of telephone conversations that have been used for years by scientists involved in speech recognition. The discussions are about subjects like sports and politics.

The work is not done yet. Microsoft aims to further reduce the error rate by better reflecting conversations in noisy environments or better understanding people with an accent or less common languages.