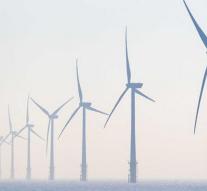 redmond - Microsoft is its server park in Cheyenne, Wyoming entirely run on wind energy. To enable the greening, the tech giant has bought nearly 240 megawatts of wind energy from different suppliers.

The investment Microsoft can sharpen its climate target for the coming years. The Windows maker already announced that it will provide about 44 percent of all its server farms green power earlier this year. Now the company has announced that it wants to run half of all its server farms green in 2018 at the latest. Around 2020, the share of green electricity should be increased to 60 percent.

Microsoft now has about 500 megawatts of wind energy available. In addition, running a number of server farms to solar energy and hydropower.