Home / World / Microsoft: Governments have to wake up 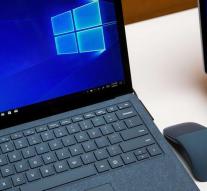 redmond - Governments should see the international ransomware attack as a wake up call, Microsoft writes on his blog. If a government finds a weakness in a computer system, it must be shared with the rest of the world right away. The company wants a 'Digital Convention of Geneva', a worldwide treaty to protect citizens.

Microsoft responds to the ransomware WannaCrypt, which has dumped companies and people around the world in recent days. The perpetrators used a vulnerability in Windows. The weakness was found by the US secret service NSA, who held it afterwards. The knowledge was stolen and recently brought out via WikiLeaks. Microsoft sent a patch (repair), but not all companies and consumers have those installed.

Microsoft believes that in cyberspace the same rules should apply as true weapons. 'Suppose some stolen American Tomahawk missiles are stolen,' said the company.