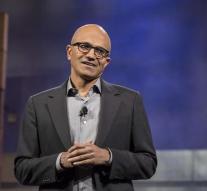 redmond - Microsoft has released the dates for the annual Build developer conference. From March 30 until April 1, Microsoft developers talk about the latest techniques and software company. What exactly is on the agenda at the Moscone Center in San Francisco is still totally unknown.

Build in 2015 was dominated by Windows 10. The major announcement was last summer to develop Microsoft HoloLens, the virtual reality glasses of the company. Furthermore, Microsoft announced that Windows 10 would get a new browser and Windows apps for the desktop also would work on mobile and vice versa.

Recently rumors surfaced that Microsoft wants to stop the drop in release numbers for Windows. Instead, it should be a single version of Windows is always kept up to date. If these plans turn out to be correct, it will undoubtedly come back on Build 2016.