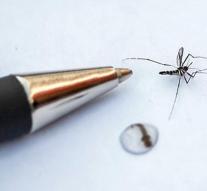 bangkok - The Thai Ministry of Health confirmed Friday that two women have borne children with little skulls after they were infected during their pregnancy with zikavirus.

The American health CDC has meanwhile pregnant women traveling to Thailand, but also discouraged other countries in Southeast Asia.

In the opinion of the CDC are next to Thailand known as the Philippines, Indonesia, Malaysia, Myanmar, Cambodia, Laos, Vietnam, Brunei, East Timor and the Maldives.

The zikavirus is transmitted by mosquitoes and causes flu-like symptoms. Most patients recover quickly, but the virus can lead in unborn children to impaired development of the skull (microcephaly).