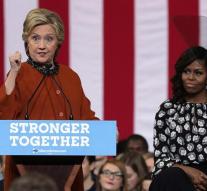 - Democratic presidential candidate Hillary Clinton appeared Thursday for the first time along with First Lady Michelle Obama during the election campaign. At a meeting in North Carolina Obama urged young men and women to vote.

Clinton, who was once first lady, Obama praised for standing up for the rights of women and girls worldwide. 'I wish that I did not have to say but dignity and respect for women has become an important issue in this election,' she said, referring to the derogatory statements about women opponent Donald Trump.

Michelle Obama himself Trump did not mention when she talked about the future presidency. 'We want a president who is serious about his job and has the temperament and maturity to do well. '