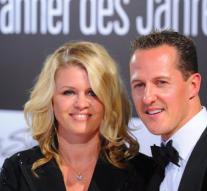 The now 47-year-old German was months in a coma in a hospital after his skiing accident in 2013 in the French Alps. In addition, the seven-time world champion was severely brain injury. He fights at his home on Lake Geneva in Switzerland still for his recovery.

The Schumacher family rarely releases information about the health condition of the former driver out.