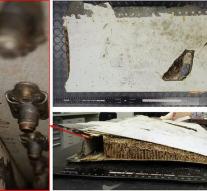 sydney - New research for the missing plane of Malaysia Airlines, the MH370 is found that the plane crashed at high speed. It seems that the plane had no more fuel and that then spiraling been dumped into the sea, according to the research report that was announced Wednesday.

The passenger plane disappeared from radar in March 2014, when the 239 passengers and crew from Kuala Lumpur to Beijing flew. It has not been found so far. There are quite a few pieces surfaced.

A butterfly valve, which was washed ashore in Tanzania, is now studied in Australia. Researchers from the Australian Transport and Safety Bureau (ATSB) said in a report that the wing was not ready for a landing.

It is suspected that the wreck lies in the Indian Ocean west of Australia.