Home / World / Mexico wants to 'El Chapo' extradited to US 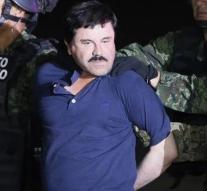 - The Mexican government is planning drug lord Joaquin 'El Chapo' Guzmán beginning to deliver next year in the United States.

The Mexican national security commissioner Renato Sales expects to transfer the former boss of the Sinaloa drug cartel in January or February, he informed Friday on TV channel Televisa.

US accused Guzmán of murder, drug trafficking, organized crime and money laundering. At the moment he is in a high security prison in Ciudad Juarez, near the US border.

Guzmán has twice escaped from a high security prison. So did the world's most powerful drug trafficker in 2015 chance to escape from a prison in Mexico City via more than one kilometer long tunnel. In January this year he was again arrested after a huge manhunt.

Guzman's lawyers want to prevent the extradition of their client. If necessary they will appeal the case to an international court. 'We will fight to the end,' said his lawyer.