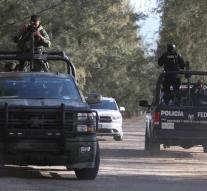 - Mexican police have at least 22 suspected gang members were executed last year after a confrontation at the site Tanhuato. Which concluded the Mexican National Human Rights Commission. Agents would moreover have tortured detainees and two bodies burned.

The security forces in May 2015 opened the attack on a ranch where gunmen had gathered., Killing at least 42 suspects were killed. It would be members of the cartel Jalisco New Generation (JNG).

Research by Human Rights watchdog revealed that the police manipulated the crime scene. So were moved seven bodies and multiple weapons. The committee could not figure out the cause of death was fifteen of the slain suspects.


The authorities have responded cautiously to the disclosure. According to national security commissioner Renato Sales is investigating the fighting still going on. He called out the policy with clear guidelines on the use of weapons by security forces.