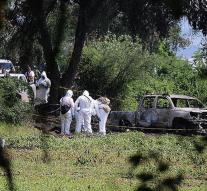 - After the murder of ten people in the Mexican state of Michoacan on Monday include a mayor and a policeman arrested for possible involvement. Which announced the prosecutors.

An initial investigation shows that the police a group of people picked up from a store and forced to step in in a red pickup truck. This was done according to a prosecutor on behalf of Juan Carlos Arreygue, the mayor of the town of Alvaro Obregon.

Saturday the dead bodies were found in and around the truck were, which was completely burnt. It was initially to nine deaths, but the number was later fixed at ten. Besides the mayor and agent three other suspects were arrested.