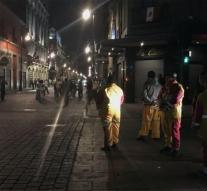 chiapas - The epicenter of the powerful earthquake in Mexico was at Pijijiapan in the southern state of Chiapas. Chiapas has an area of ​​75,635 square kilometers and 4,224,800 inhabitants. In the east, the area borders Guatemala and the south on the Pacific Ocean.

The area is predominantly mountainous. On the border with Guatemala lies the Tacaná volcano and there are also two large dams. The city of Palenque is known as the archaeological site of Mayan civilization. This city is located about 900 kilometers east of Mexico City.

SEE ALSO: Heavy earthquake in Mexico Most of the population is poor and works in agriculture. Definitely a quarter of Indian origin. There are also many people who fled from Guatemala in the last century. The state is governed by a governor.