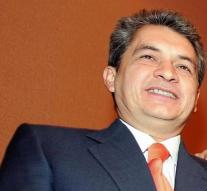 mexico - A former Mexican politician has been arrested in Italy. Tomás Yárrington, from 1999 to 2005 governor of the northeastern state of Tamaulipas, was sought for years on suspicion of links with the drug mafia.

Yarrington was held in cooperation with the Italian authorities informed the federal prosecutor in Mexico Sunday. According to Mexican media happened in Florence. Mexican law assumes that it will be delivered in a few days.

The former governor is among others suspected of having accepted bribes from drug cartels. The American narcotics department DEA investigation up to him. Yarrington was expelled from the ruling party PRI in 2012. Since 2013 he was in hiding. For information leading to his arrest Mexico had offered a reward of more than 750 000.