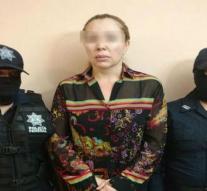 - "The suspected leader of the Mexican drug cartel Beltrán-Leyva was arrested Tuesday by police. It involves Clara Elena Laborín Archuleta, the wife of drug boss Hector who is currently serving a prison sentence of two years. The cartel was behind the recent wave of violence in the Mexican resort of Acapulco."

"Police arrested the woman in the northwestern city of Hermosillo. She was on the list of most wanted persons in the Central American country. Beltrán-Leyva is a fraction of the notorious Sinaloa cartel."