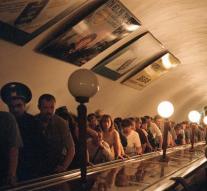 moscow - The metro in Moscow is expanded with 63 new stations and 142 kilometers of trains. That's what the Moscow Times reports on the authority of Moscow's urban development service. The new stations must be ready by 2021 and the first five will be open this year.

The project is budgeted at 5.5 billion euros. Most stations come on the Third Interchange Contour, a metro line that will run in a major circle around Moscow. According to Moscow, this 68-kilometer ring line is the tallest in the world.

The metro in Moscow is used by 9 million people daily.