Home / World / '#MeToo' seems to be widespread in North Korea 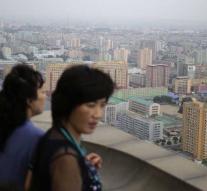 seoul - North Korean women are powerless against sexual violence by government officials. Unwanted sexual behavior occurs even so often that it is seen as a normal phenomenon in daily life in the isolated dictatorship, concludes Human Rights Watch after talks with dozens of displaced North Koreans.

During the discussions with the human rights organization, refugees opened a book about the abuse. Women who refuse to grant 'sexual favors' are at great risk. Their merchandise can be confiscated and they can even end up in prison.