Home / World / Meteorologists US expect more of the same 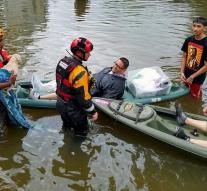 houston - Anyone who clicks the South Texas weather forecast sees the gloomy forecast of the meteorologists. The enormous rainfall that the Harvey storm inflows is still far away, but slides extremely slowly toward the east, towards the neighboring state of Louisiana.

Tuesday offers nothing but a heavy rainfall. At some places in and around Houston, even 127 centimeters of rain can fall. The weather services therefore talk about 'life-threatening floods'. The situation is unclear in some places. The estimates of deaths range from three to eight.

The Red Cross counted 17,000 people in Texas on Tuesday morning in emergency shelter. The George R. Brown convention center in Houston can usually lose 5000 people, but it has already almost double the number. The emergency services are constantly picking up people from the water.

President Trump is on his way to Texas City Corpus Christie. Even before he left, he said the affected state already had ample financial assistance.