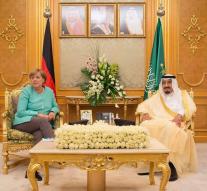 djedda - German Chancellor Angela Merkel wants the Saudi Arabia-led coalition to end up with air attacks in Yemen. She said that Sunday during her visit to Saudi Arabia.

'We are going for the UN-led process towards a diplomatic solution,' Merkel said in Jeddah. 'We do not believe there is a military solution to this conflict. According to Merkel, it should be prevented that the already humiliating Yemen population is ending with an even worse humanitarian situation.

Under the leadership of Saudi Arabia, the coalition has been attempting to hunt Houthi rebels for two years to hold most of the country.