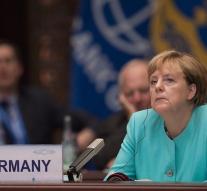 hangzhou - German Chancellor Angela Merkel on Monday 'very dissatisfied' wrought on the results of the state elections in Mecklenburg-Vorpommern. Her CDU was there right overtaken by the relatively young party Alternative for Germany and finished in third place.

Merkel, who is present at the G20 in Hangzhou in China, suggested that the federal policy that apparently overshadowed by the Land. She acknowledged that its policy to welcome has played an important role refugees. 'But I still think that we have taken the right decisions. '

The task now is to regain the confidence of voters, Merkel added. She said that Germany is already working to curb the influx of new asylum seekers. It is important that asylum seekers who have no right to remain, be repatriated.