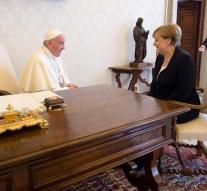 vatican city - Pope Franciscus has encouraged German Chancellor Angela Merkel to continue to work for international cooperation. In addition, the German leader, on a visit to Vatican City, said in his own accord that he was holding the request for the Paris Convention on Climate Change.

Merkel had a private conversation with the church forty forty minutes. The leaders, according to the Vatican, discussed the need to combat climate change, poverty and terrorism. The chancellor later said to want to commit to a world 'in which we want to break walls instead of building them. '