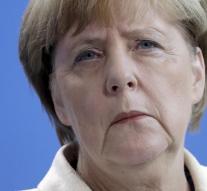 - A fly zone over Syria has little chance of success, thinks German Chancellor Angela Merkel. ' In the current situation, I am skeptical about a no-fly zone '' Merkel said Tuesday.

Merkel's own foreign minister, Frank-Walter Steinmeier, had called for a no-fly zone after the deadly attack on an aid convoy in Aleppo.

Merkel called on it to do more for a ceasefire in Syria. In addition, they looked mostly to Russia and the Syrian regime. She spoke of ' a deep, deep setback in recent days '' and called the renewed assault on Aleppo ' absolutely unacceptable. ''