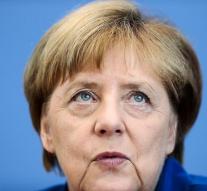 - Chancellor Angela Merkel has in response to the recent attacks in Germany her one-liner 'Wir purchase das '(' We can handle this) repeated. Merkel made that decision months ago when it became clear that Germany had to handle a huge influx of refugees.

Merkel also has nine points and plan for more safety presented. They did that Thursday at a press conference in Berlin, which she interrupted her vacation.

Merkel wants to include a system of early warning 'against radicalization, more security personnel and more research into radicalization. She also said that security forces must work together better.,, Where there are gaps, we need to act, 'she stressed.